Custom Search
Best Dive Movies
Best Dive Photos
Best Dive Sites
Free Subscribe
, if you would like to give Greatest Dive Sites permission, only by request, to upload dive items to your FaceBook account and visa versa.

The Blue Hole is a submerged collapsed underwater cave with spectacular stalactites and diving amongst bull sharks.

The Blue Hole is a sunken underwater cave of approximately one thousand feet wide and three hundred feet deep, located in the center of Lighthouse Reef. From out of the air you have spectacular views of this geological phenomenon. Theories of a meteorite that struck Lighthouse Reef millions of years ago and leaving this huge crater behind are not true. It was formed in one of our ice ages when the land was lowered enough to expose lighthouse reef. Sweet water created holes and cracks in the limestone formation until it finally collapsed, leaving this huge hole. This dive site was discovered in 1970 by Jacques-Yves Cousteau's Calypso expedition. Nowadays, it is a Marine Protected Area and a UNESCO World Heritage site.

Being the most popular dive destination, Lighthouse Reef is serviced by many boats and dive packages. A day to the blue hole is often combined with diving Belize's second best dive site Half Moon Caye Wall. In between both dives you will often visit Half Moon Caye and its resident population of red-footed boobies. There is a small trail to a lookout where you can see all the nests of these fantastic birds. The shallow white beach is great to do some swimming although most divers are happy enough to be out of the water for some time before diving again.

Below one hundred feet you can see the top of an underwater cave which contains huge stalactites of three feet wide and more than twenty feet long. When lucky, sharks like the blacktip tiger and hammerhead can be found at these depths, but on most dives you won't see anything else than the impressive stalactites. Its wall has some algae called Halimeda, several encrusting sponges and dripstone pillows. Because sunlight doesn't reach the inclining walls, you won't see much coral growth. Most of the time there will be a slight thermocline around 90 feet which improves visibility substantially. On your way back, you will find lots of marine life. Bull sharks, horse-eye jack and cods are several larger examples. The snorkeling around the hole's perimeter is fabulous, with lots of color in crystal clear and quiet water. 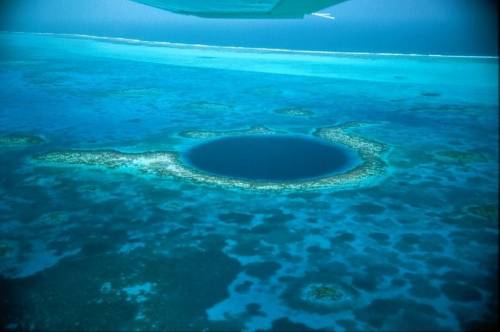 Visit our partners! Or become one.

We are a full service dive shop in Placencia, Belize. Let us be your one stop shop for all sea and leisure related activities ( diving, snorkling, fishing, kayaking and inland adventure tours) Our experienced intrsuctors teach all level from beginner to professional.

Huracan Diving has a diveshop combined with a B&B, restaurant and bar on Long Caye, inside the Lighthouse Reef.  Only 15 minutes from the blue hole and right next to  Half Moon wall and  Long Caye wall.

Come and explore the Lighthouse Reef.  We offer personal first class dive service, a relaxing stay in our B&B, beautiful nature under water as well as on the island.  The B&B has a cosy atmosphere with only 3 rooms.  We serve international foods in our small restaurant and keep a caribbean vibe in the bar!

The Lazy Iguana Bed and Breakfast is an Island B&B. Where "the elite sleep and eat in bare feet"!

A very nice and exclusive three story private home, nestled in a quiet part on the island of Caye Caulker. The B&B is on the second floor and has a separate private entrance. The four very comfortable air conditioned rooms have ceiling fans and private bathrooms. We use rain water exclusively. The top deck has a spectacular 360 degree view of the Island and sea. The sunrise and sunset views are breathtaking!
[Add Message]Messages from readers:

The origin of Blue Hole dates back to an ice age about 15,000 years ago. Enough sea water was frozen in glaciers during this time to lower sea level more than 350 ft, exposing the limestones of Lighthouse Reef. Huge subterranean caverns formed when fresh water flowed through the limestone deposits. Since then, the roof of the cavern has collapsed to form the sinkhole.

Made famous by a Jacques Cousteau's 1970 Calypso expedition, Blue Hole is one of the best known dive sites in Belize. It is a circular, deep depression in the center of more than 75 sq. miles of shallow, blue-green water. Its diameter at the rim measures 1,045 ft, whereas its maximum depth is 412 ft. Except for two narrow passages on the eastern and northern rims, Blue Hole is completely rimmed by living coral.

For the advanced diver this site is well worth the trip. You should plan to dive either the north or south side to a depth of 100-150 ft where the shallowest cave features are found. Begin your dive by snorkeling to the coral rim. This serves two purposes: first, it conserves air, and second, it provides an opportunity to get everyone making the dive together before you descend. Your no-decompression bottom time is short at the planned depths so it is best to snorkel toward the center to Blue Hole, just beyond the vertical wall, before descending.

My dive here was fantastic. It starts with diving down into the deep black darkness. Going slowly down to almost 40 meters of depth, taking a quick look at the stalagmites there, and then we had to ascend again. Between 30 and 20 meters we were surrounded by eight or nine bull sharks. They were just waiting for one of us to exit the group. Then, at our safety stop, we were surrounded by big cods. And that's all the life I have seen, three kinds of species. As I said! Simplicity at its best!

The Great Blue Hole in Belize was even better than all the books, dive shops and divers say. Formed because of a collapsing limestone cave, now a pitch black wall dive of over 150m deep. It was simplicity at its best. Starting with a huge group of potato cods circling us, then the stalagmites at 44 meter deep (no narcosis as far as I know), and on the way up we saw up to 15 bull sharks waiting for one of us to exit the group. It was one of my best dives ever, so simple and pure.

Take a look at all the pictures!

Take a look at some of the other dive destinations.